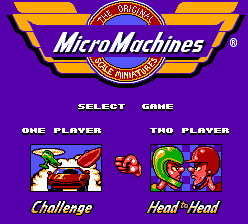 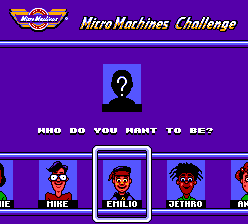 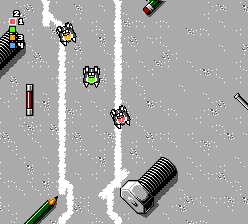 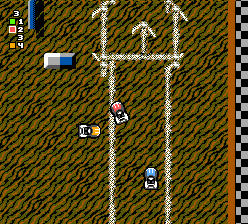 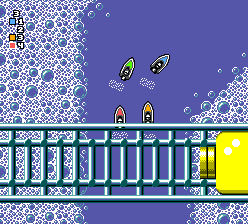 If you’re bored of racing Formula 1 cars, rally cars or MotoGP bikes in their natural habitats, the Micro Machines series could be for you. It involves racing miniatures representing particular vehicle types across a particular terrain found around the house. The Sports Cars race on the desktop, 4x4s in the sandpit, Formula 1 cars on a snooker table, and so on.

These levels were packed with variation. The Snooker tables has the track painted on, although this is open to deviation (as are most levels), and had you racing through the pockets and across the rim of the table. Tanks raced as well, with the chance of shooting out your opponent if they got directly in front of you. The desktop levels include binders to jump across, pencil-sharpeners to avoid, and lots of visual jokes in the open homework.

Viewed from overhead with small graphics, the races include up to 4 cars. In one player challenge mode you race through the 21 tracks in a set order, selecting your 3 opponents as you go along (adding a fair amount of strategy – ideally you should aim to eliminate the better CPU cars early on), eliminating one after every third race (assuming that you can finish in the top 2 of a race within your 3 lives). If you win 3 races in a row without using a continue you get a time-trial race which can earn you an extra life. 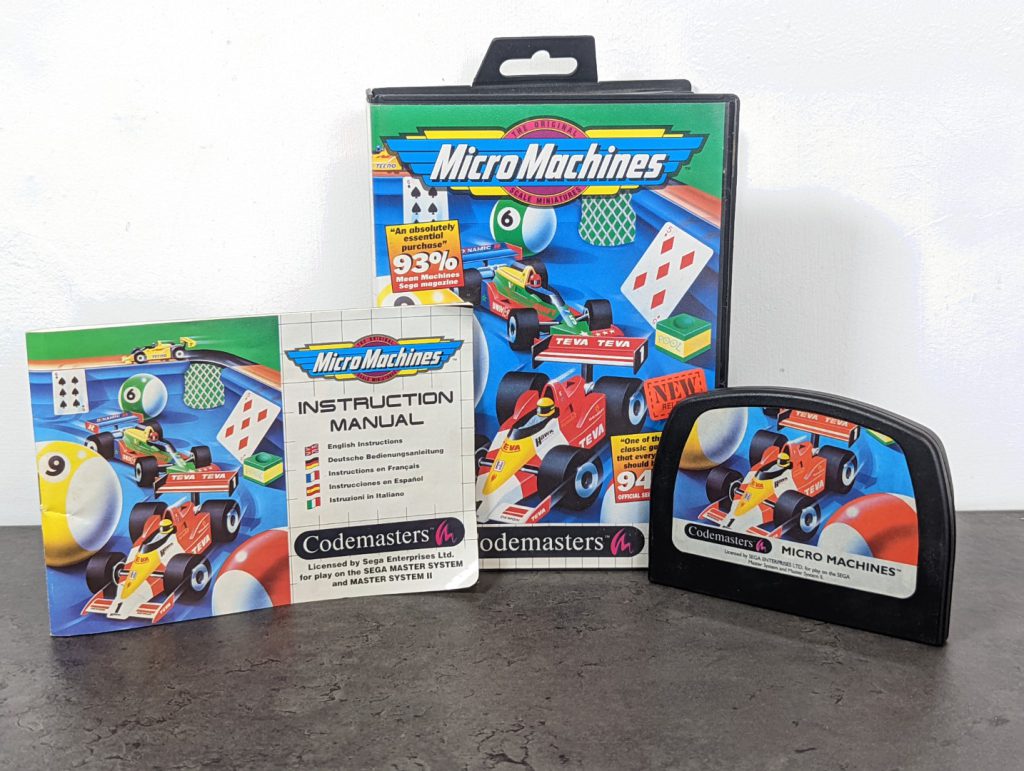 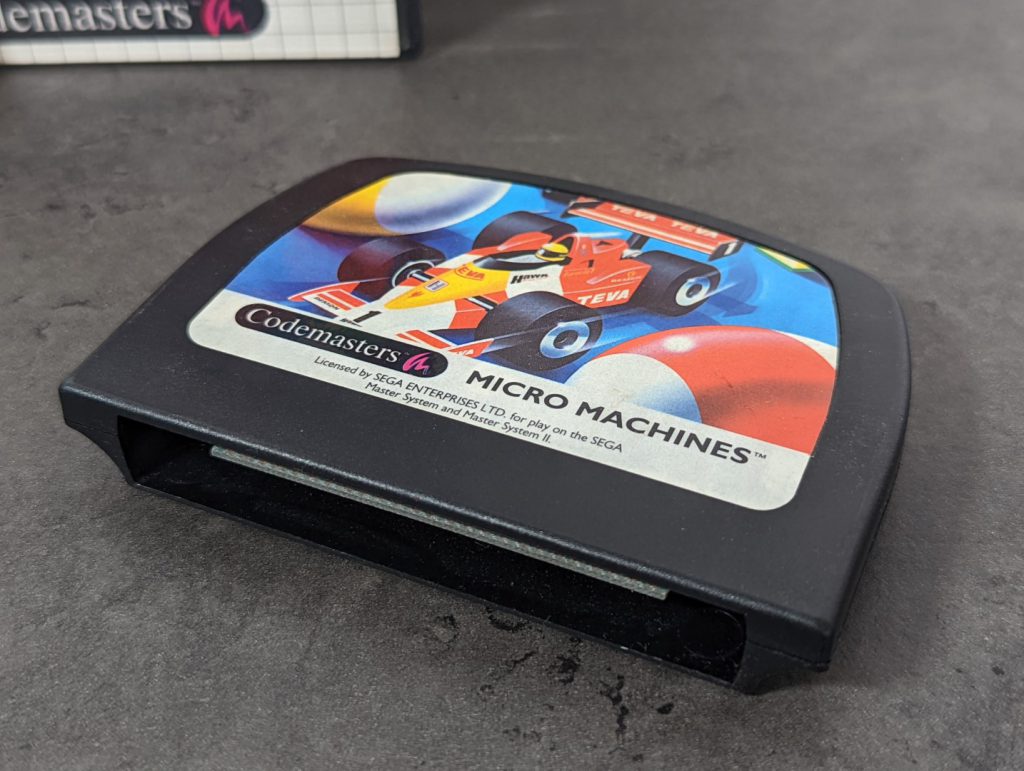 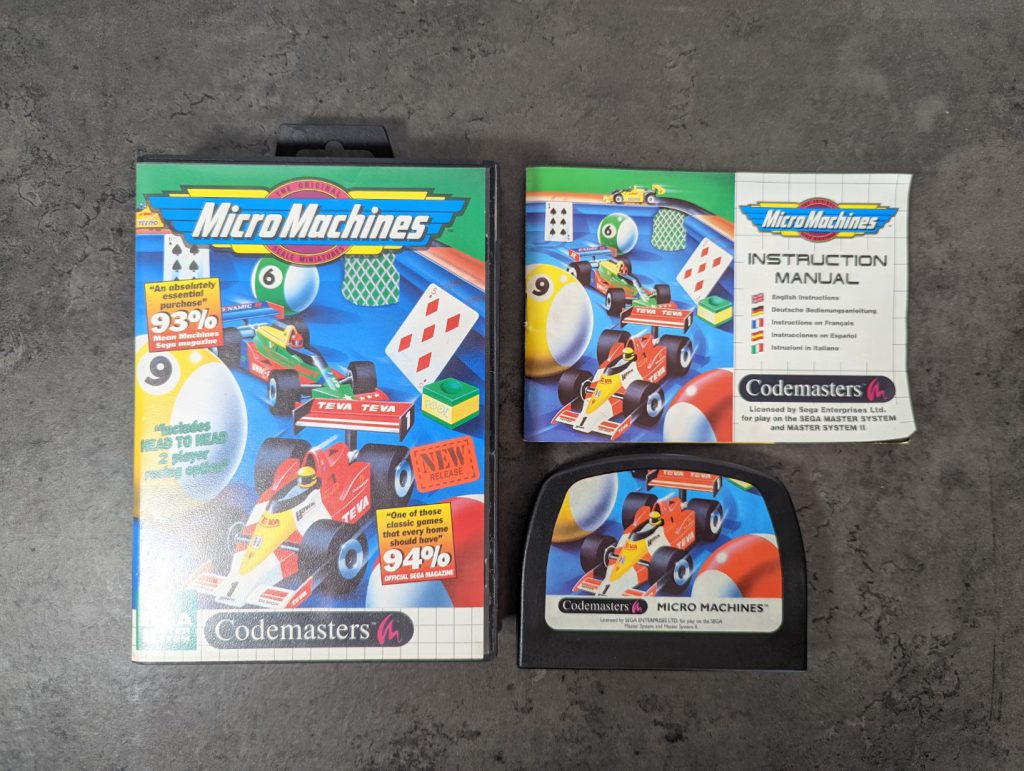 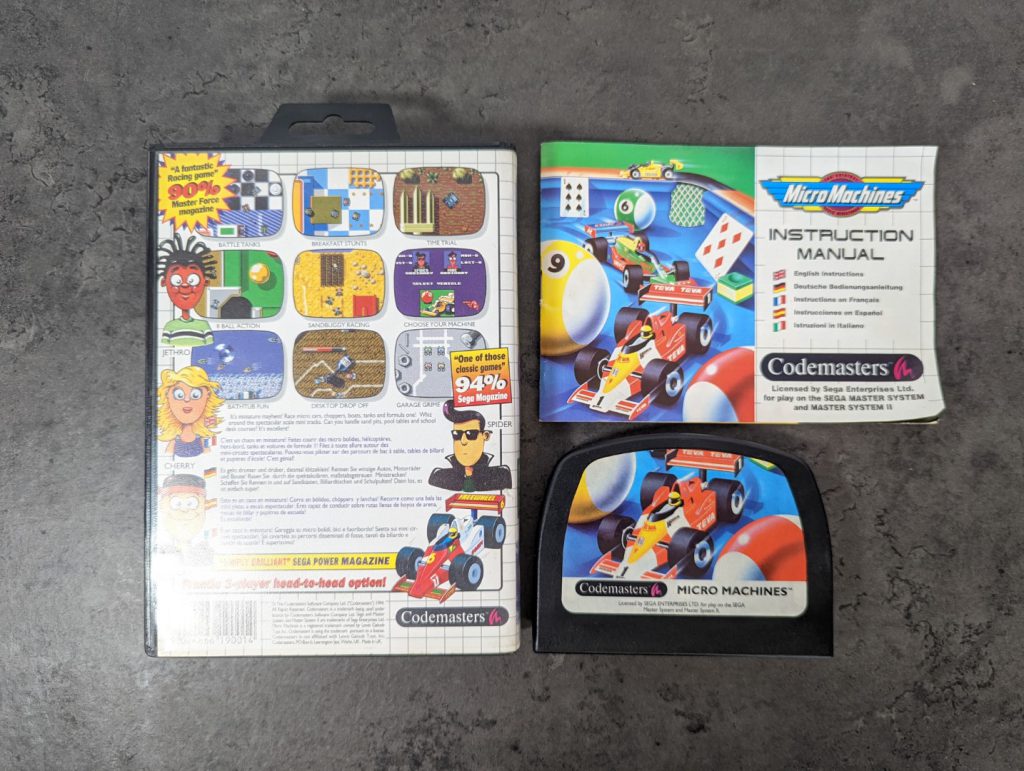 The Dark Horse comic book crossover of the two famous 80s cyborgs spawned various different game adaptations. RoboCop versus The Terminator on Sega systems is only loosely based on the comic.

The player controls RoboCop who during his duty of policing the streets of Detroit is lured into a trap by Terminators sent from the future. By uploading himself into the computer network, he becomes the seed from which the malevolent Skynet grows. Years later, in the post-apocalyptic future, RoboCop is reactivated and must help the human resistance by attacking and defeating Skynet once and for all.

The game is a platformer with heavy shooting elements and consists of 10 levels. Many enemies stand in RoboCop’s way and must be destroyed via 8 different weapons. RoboCop begins the game with only a basic pistol, but other weapons can be found, including flame and grenade throwers, laser guns, self-seeking missiles and others. While all guns have unlimited ammo, only two can be carried at the same time and being killed means the currently equipped gun is lost.

The game is evenly split between present and future levels. Enemies in present Detroit include mostly street punks and other criminal elements while the future is of course populated by deadly machines: Terminators, robotic dogs and spiders and many automated guns. Each level ends with a boss battle, featuring Terminators, heavy tanks and RoboCop’s famous adversaries ED-209 and Cain (aka RoboCop 2). 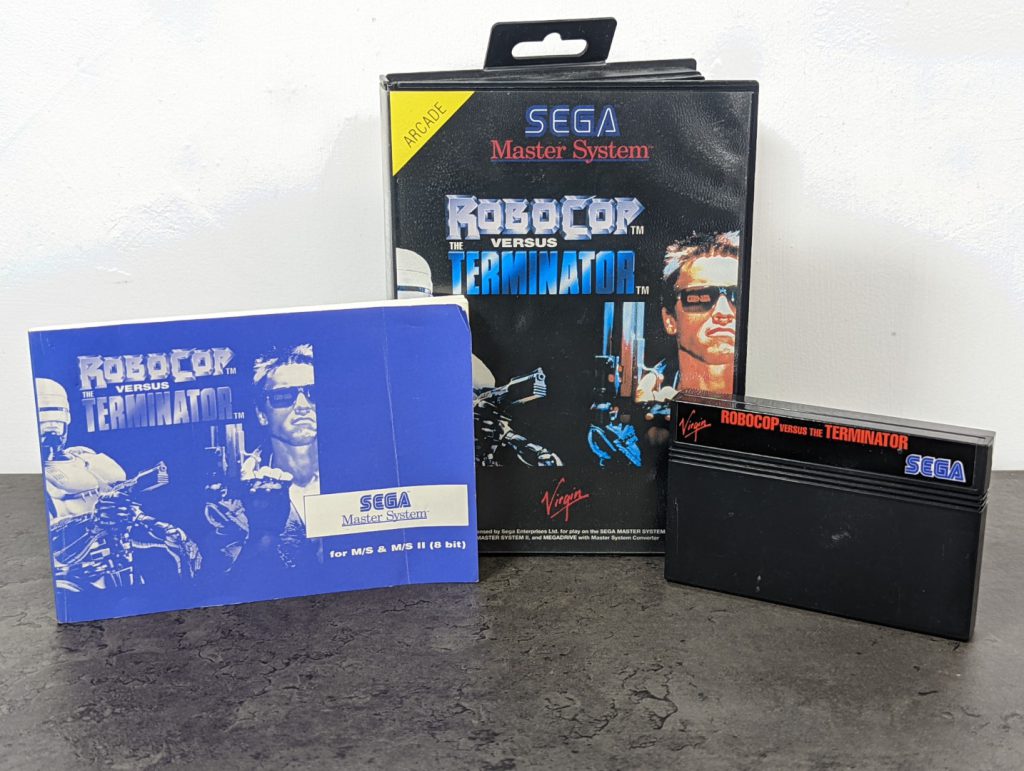 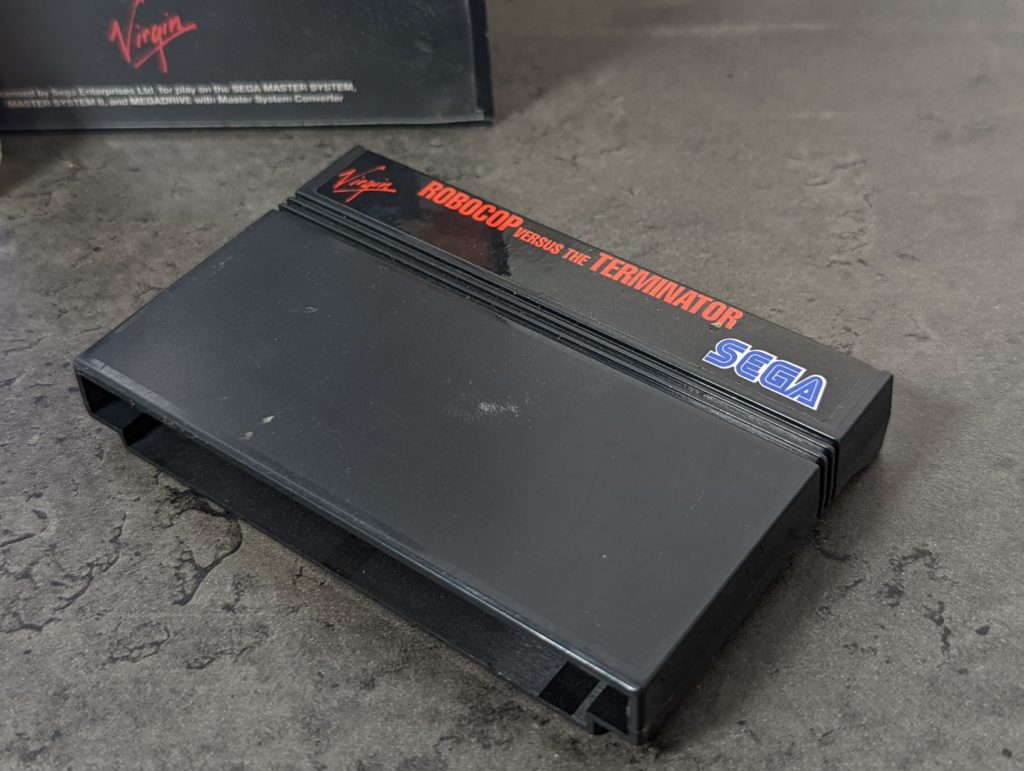 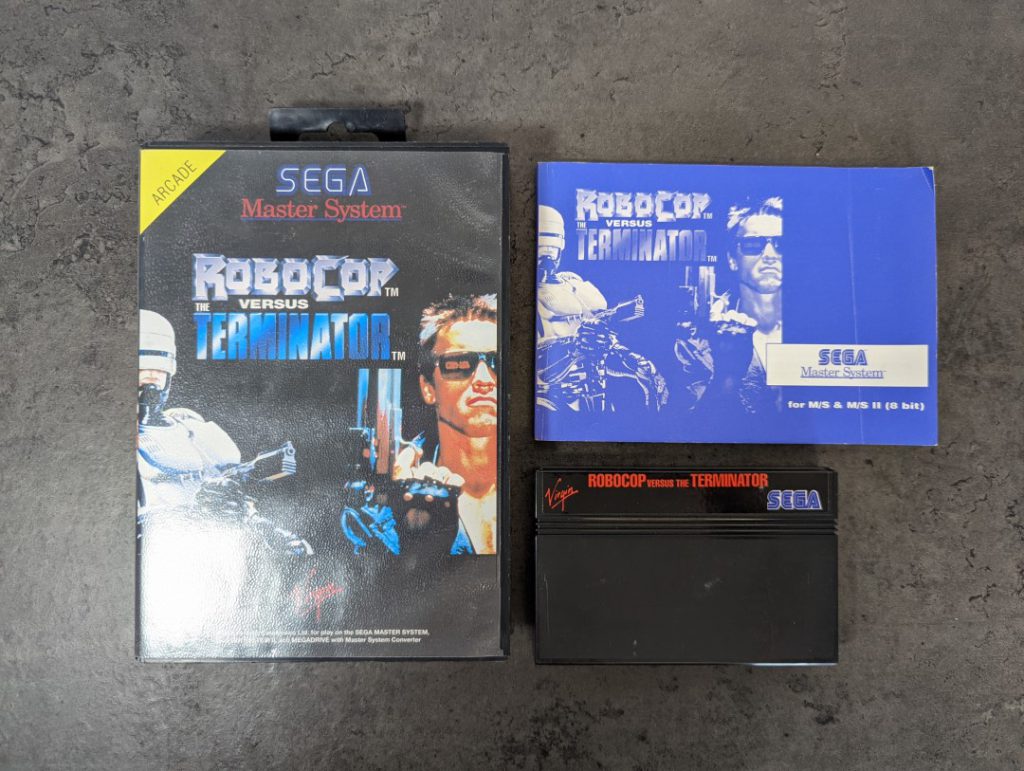 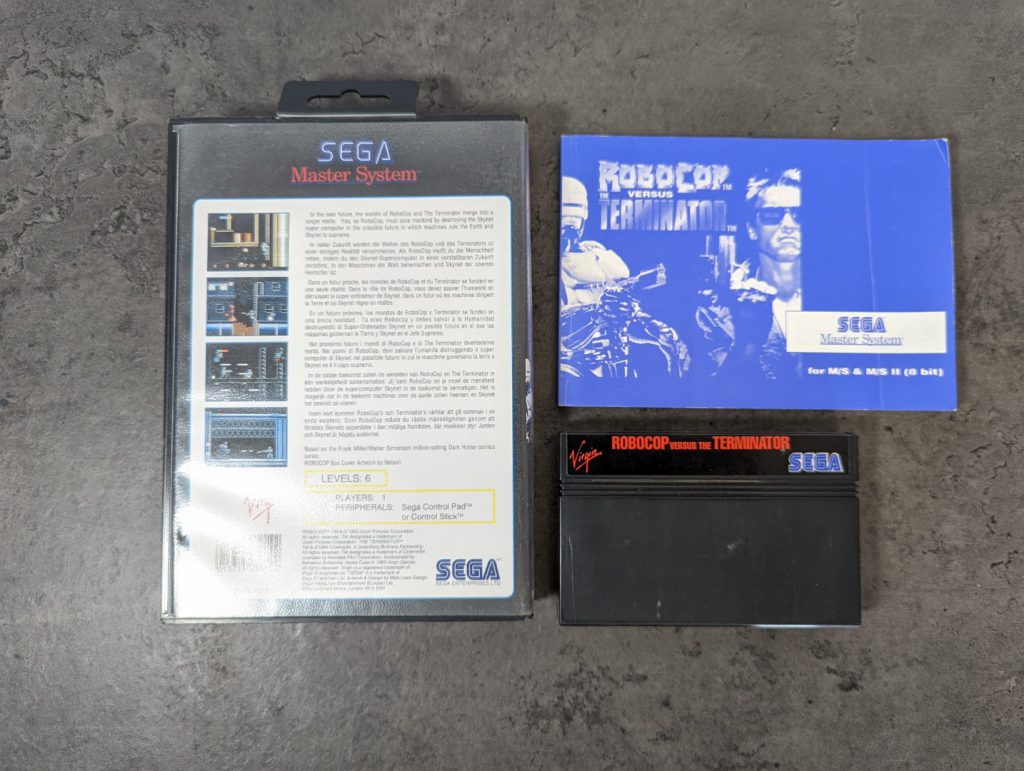 Coming back from the vacation Sonic took after foiling the plans of Dr Robotnik, he finds that Tails and all his other animal friends are missing. Sonic finds a letter waiting for him, that reads:

Robotnik is back, and he’s captured all the animals on the island! He is holding me in a place called the Crystal Egg. In order to free me, you have to find and bring the six Chaos Emeralds.

Robotnik made me write this. He says he’s waiting for you, and he’s created six really nasty robots in order to ‘get rid of you once and for all.’ I don’t know what he has planned, but Sonic, please be careful!

That being more than enough motivation for him, Sonic races out to defeat Robotnik again.

The Master System version is totally different than the Sonic 2 for Genesis. Tails obviously doesn’t accompany you, like he can in the Genesis release. Sonic can also not do his infamous buzzsaw roll by simply ducking and pressing jump. 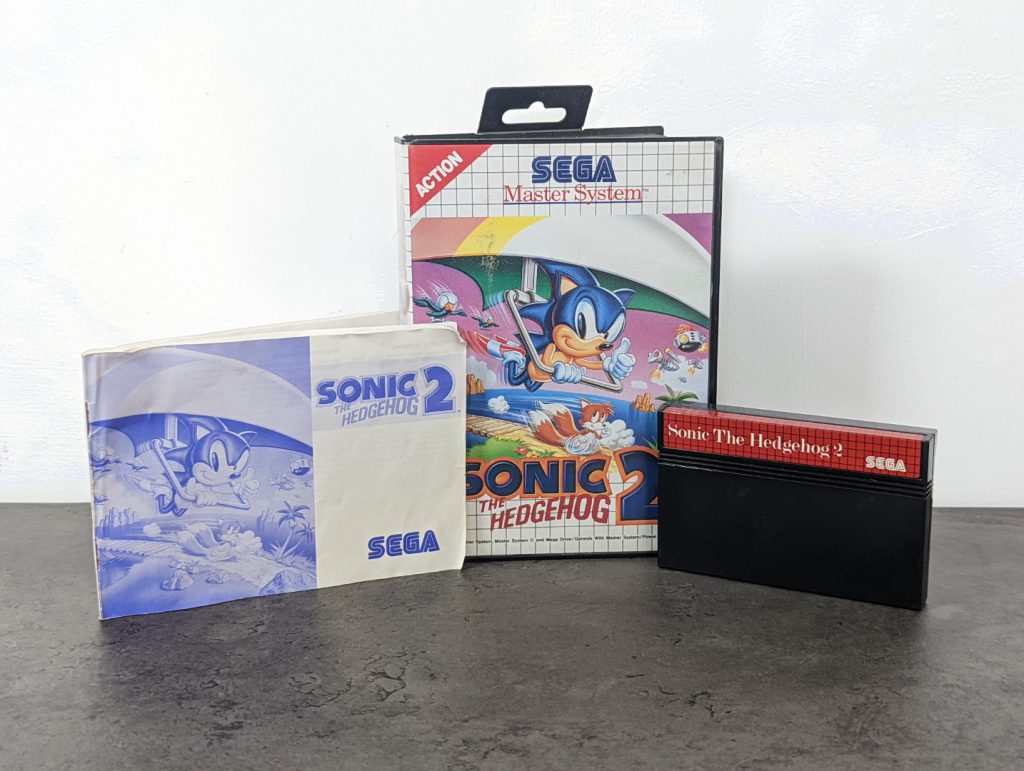 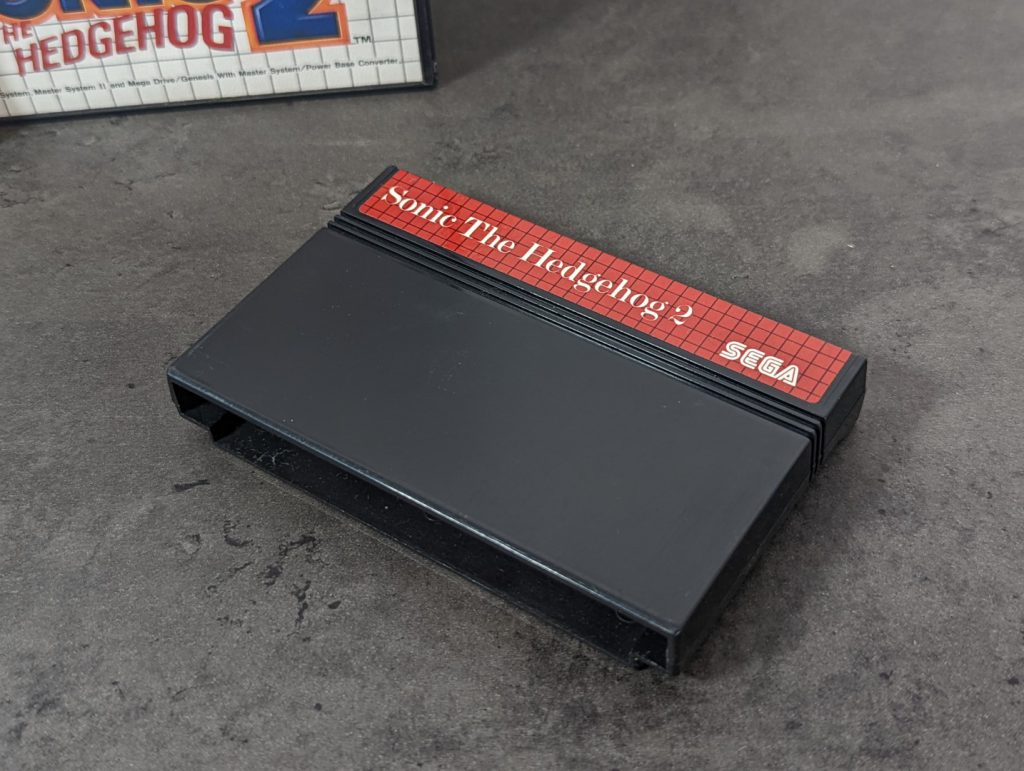 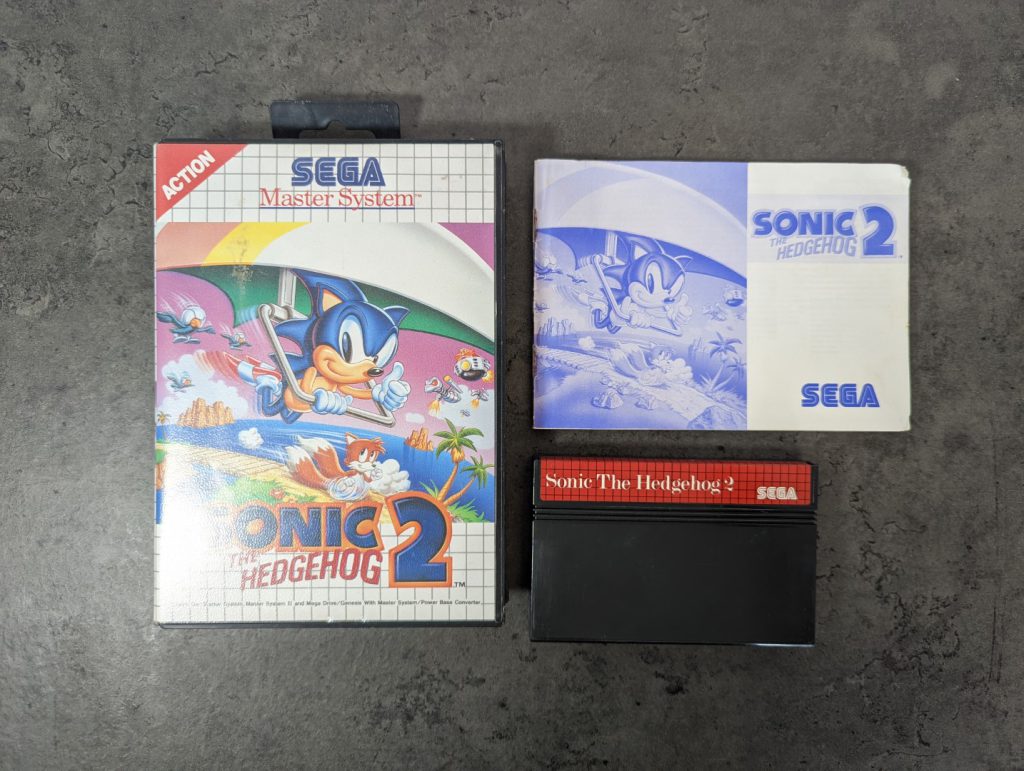 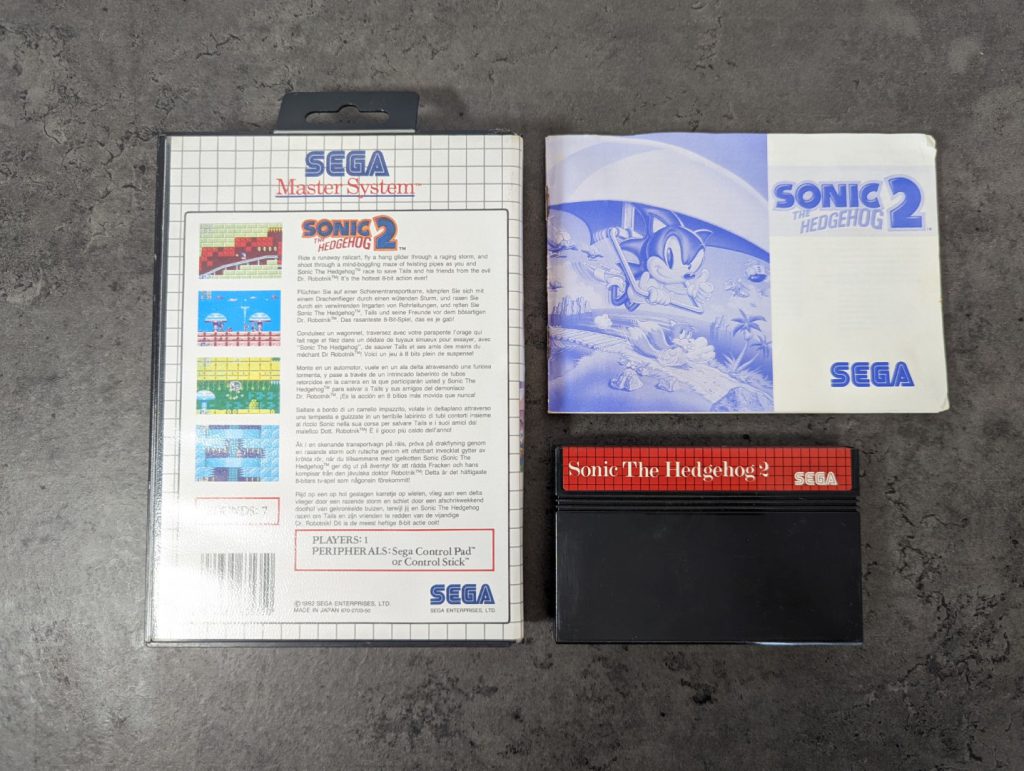