Mario Bros. is a title for the Game & Watch and was released in 1983, three months before the much more popular arcade title, making this the first game to feature Luigi.

Mario must first take a pallet out of the machine on the lowest level and place it on the lowest of five conveyor belts running in alternating directions. A bottle is placed on the pallet as it passes through the divider between the screens and continues on until it reaches the end of the conveyor belt. Here, Luigi must take the package and place it on the above conveyor belt, which takes it back to Mario, who sends it back to Luigi on the next conveyor belt. Luigi sends it back again, and Mario has to put it on the highest conveyor belt, where it is sealed while passing through the column. Luigi then throws the sealed package onto the delivery truck, which eventually gets filled up and leaves, giving Mario and Luigi a brief break until it returns empty. The conveyor belts get faster and the number of pallets on the screen increases as time goes by, forcing Mario and Luigi to scramble up and down the ladders in order to prevent the packages from falling off the ends of the belts. Each time a pallet or package falls off, the Mario Bros. get yelled at by their foreman, giving the player a miss. If the player manages to score 300 points without a single miss, the points that are earned will be doubled until the player does get a miss. If the player earns a miss before scoring 300 points, all misses will be cleared instead. After three misses, the player receives a Game Over.

The model allows for simultaneous two-player action, with one player controlling Luigi on the left half of the game and the other playing as Mario on the right, making it the very first Mario game to have two-player mode.

The Multi Screen unit is held sideways in a similar fashion to reading a book. Nintendo manufactured 1,000,000 units of the game worldwide. The game’s model number is MW-56. The M stands for Mario, though it’s unclear what the W stands for.
As in all Game & Watch games, Mario Bros. contains a clock that has an alarm. The alarm can be set by using a sharp object and pressing the alarm switch. If done correctly, an image of a bell should appear. Following this, you can set when the alarm should go off. Once the time arrives, an alarm will sound and the bell will start to move. If the player is playing the game, then the alarm will not sound, but the bell will still move. The alarm will continue to ring for about one minute.
Within the game’s box were the game unit, two LR44 batteries, and instruction booklet and battery stickers. 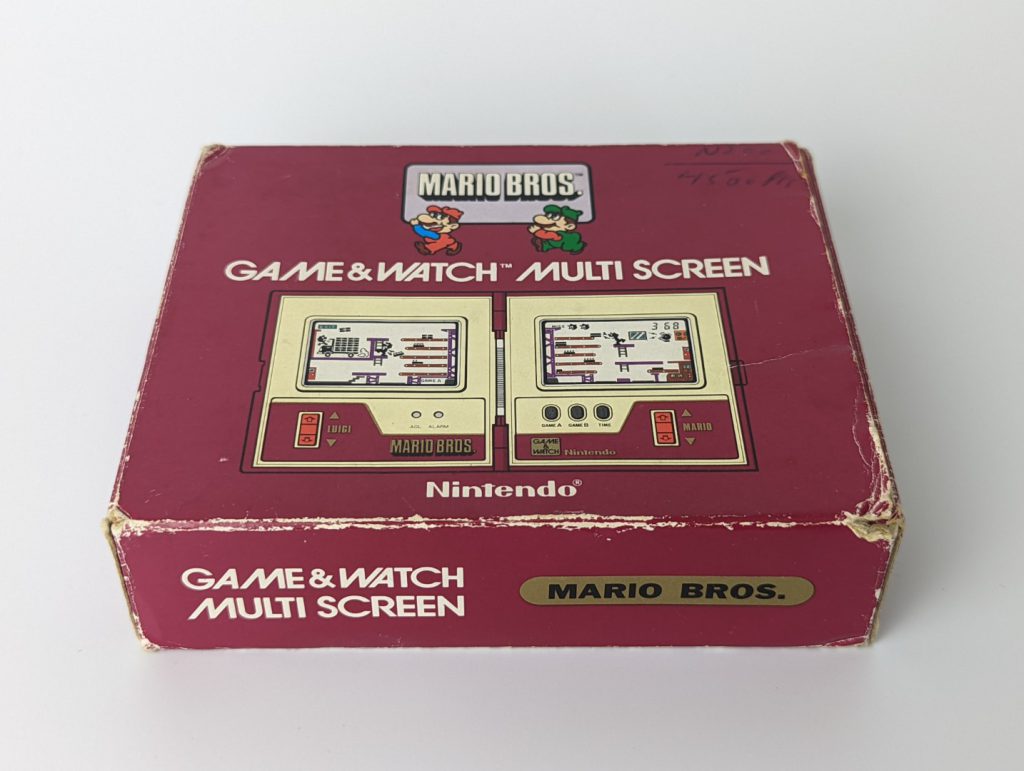 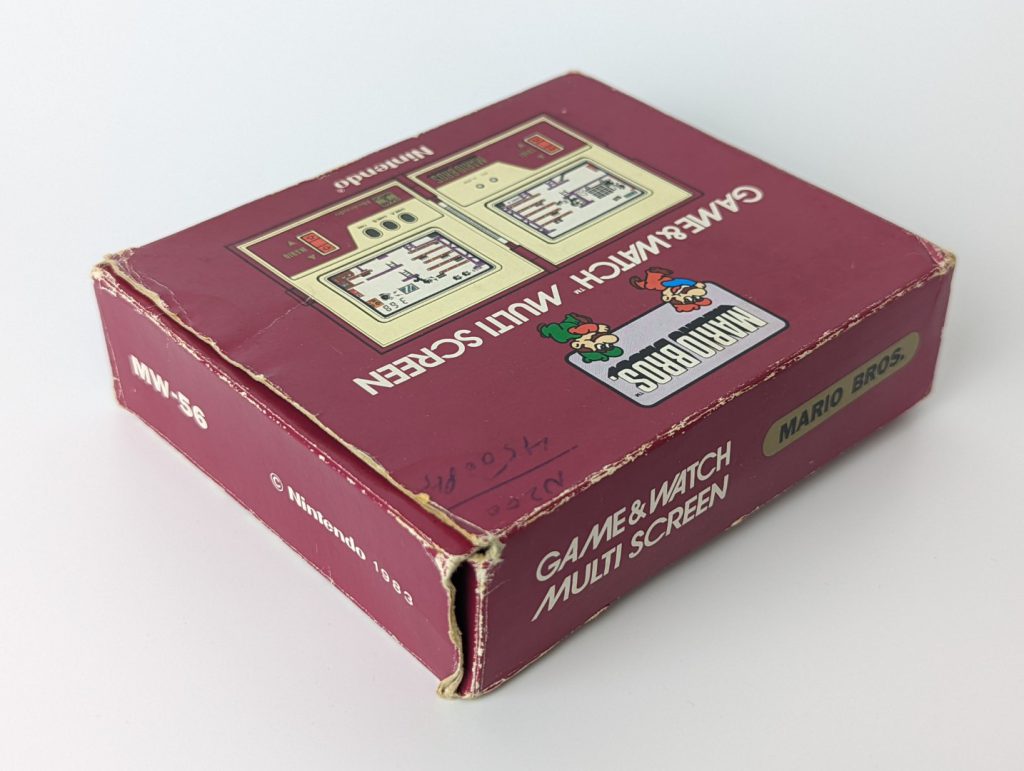 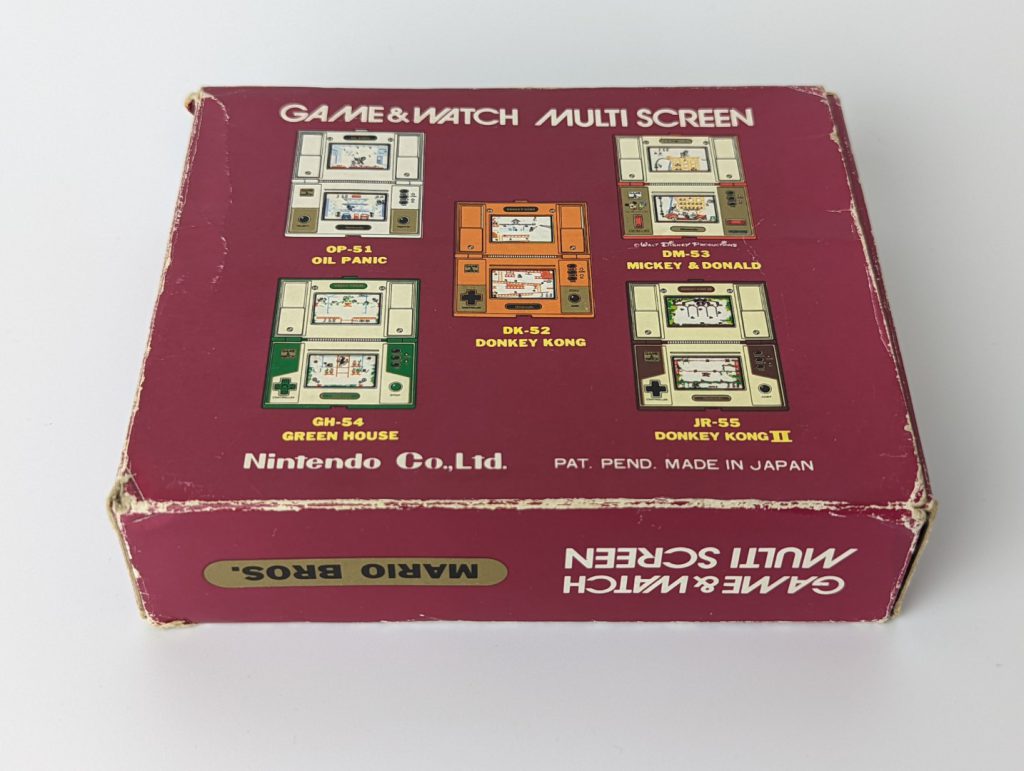 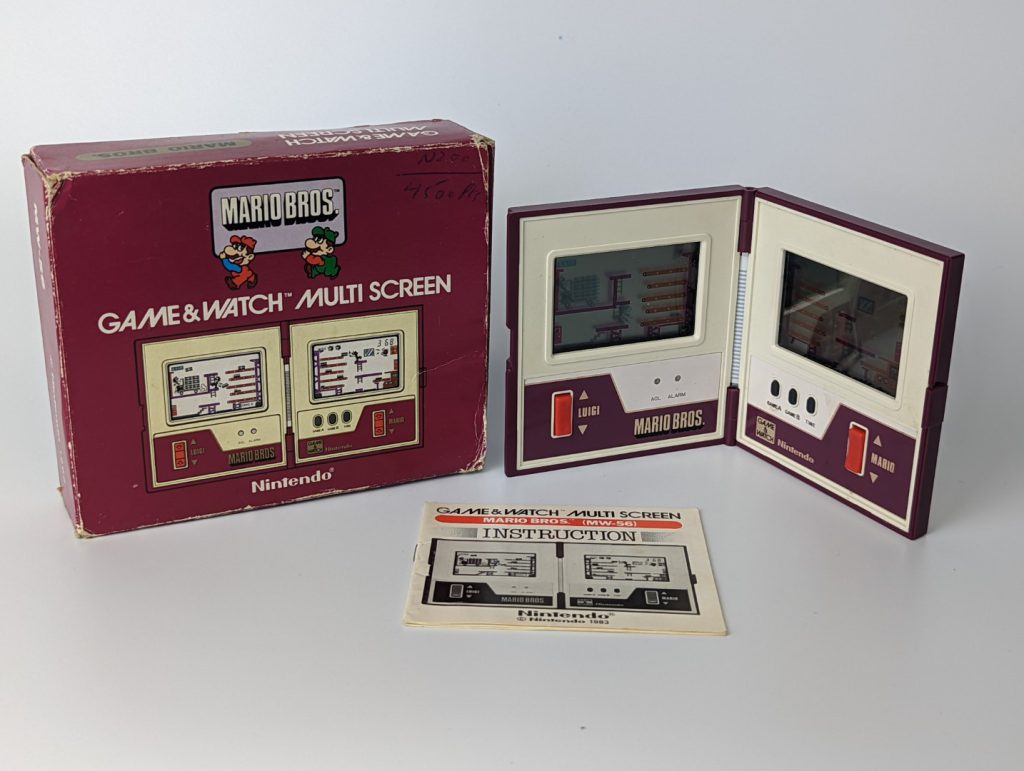 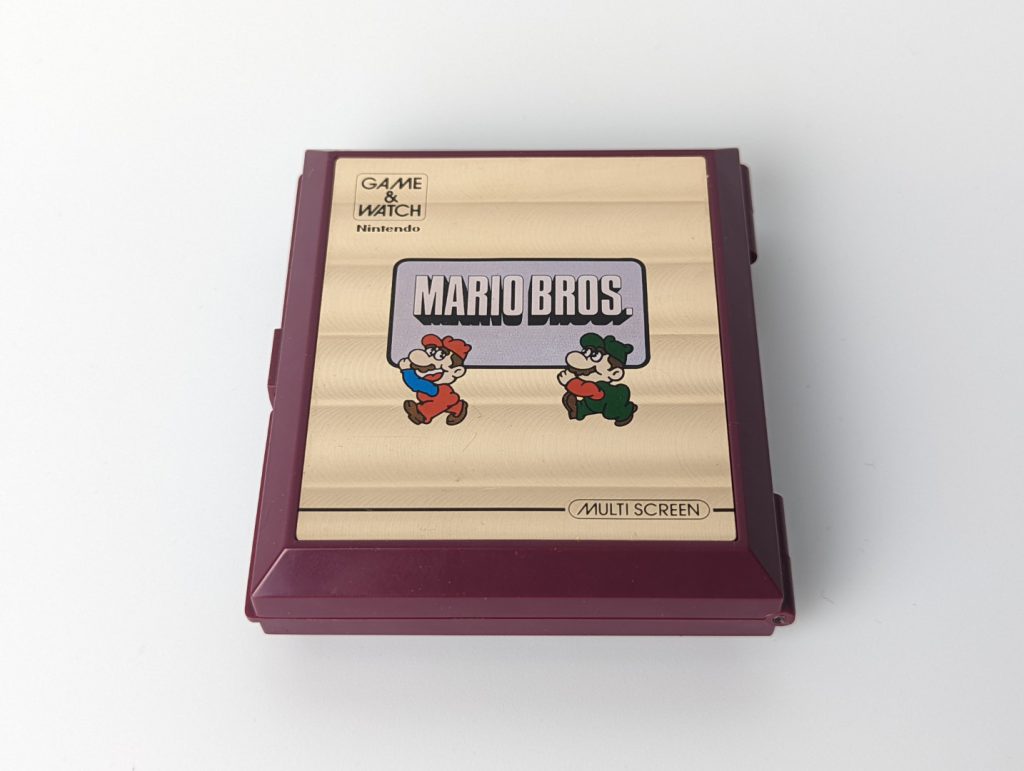 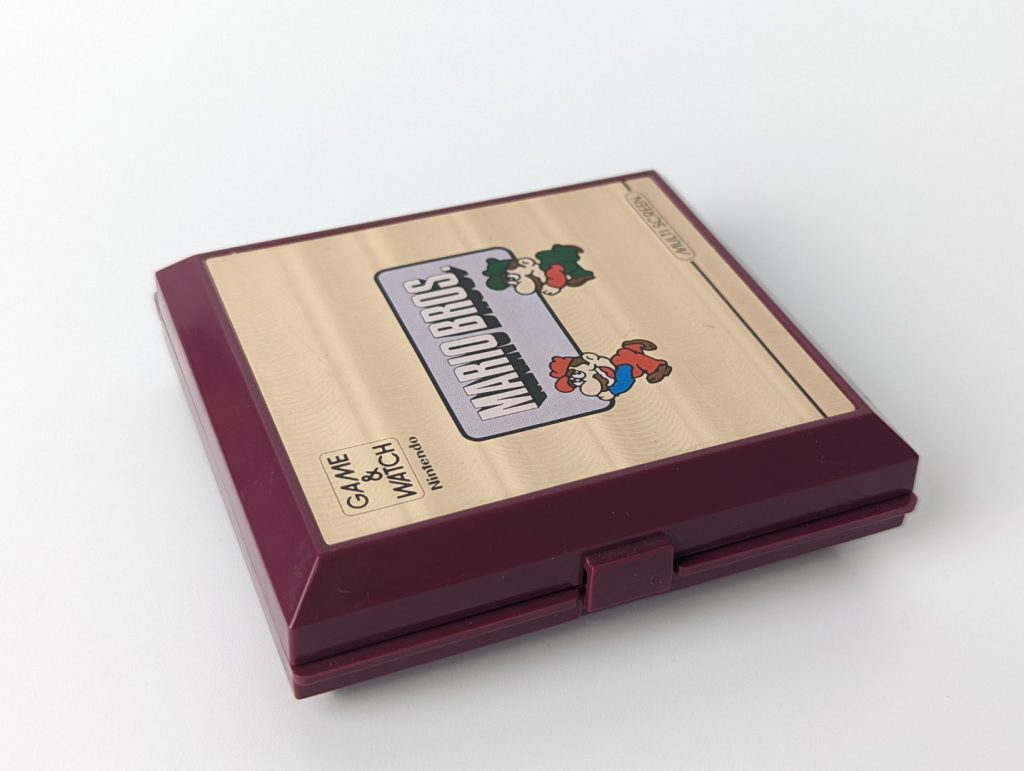 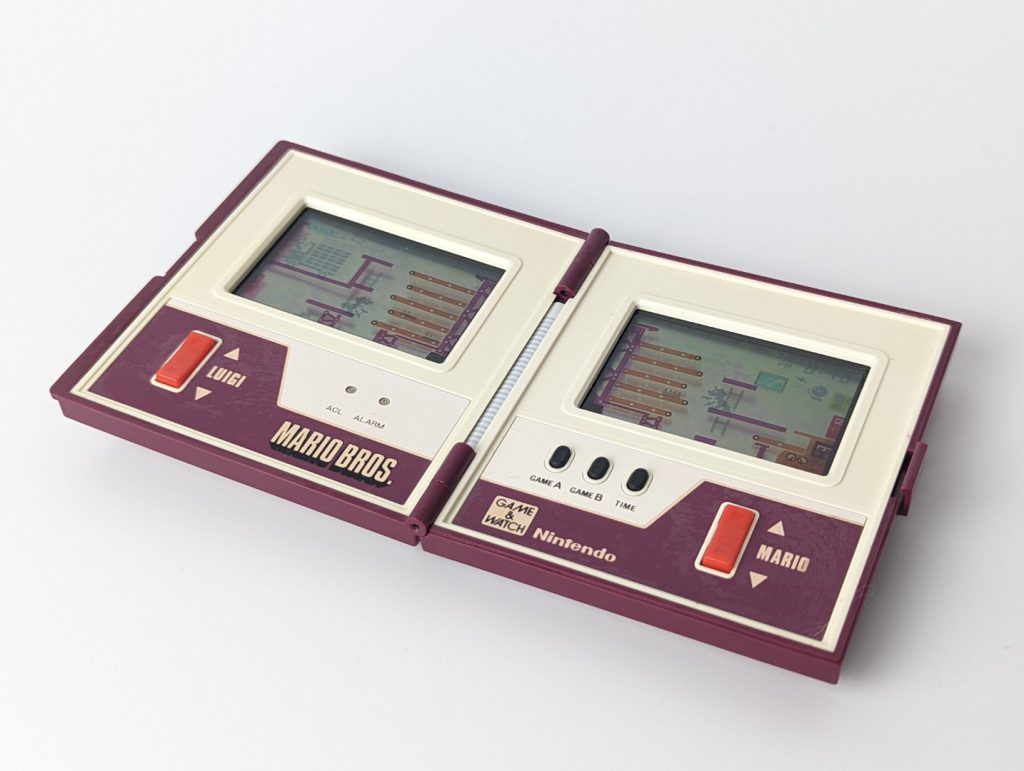 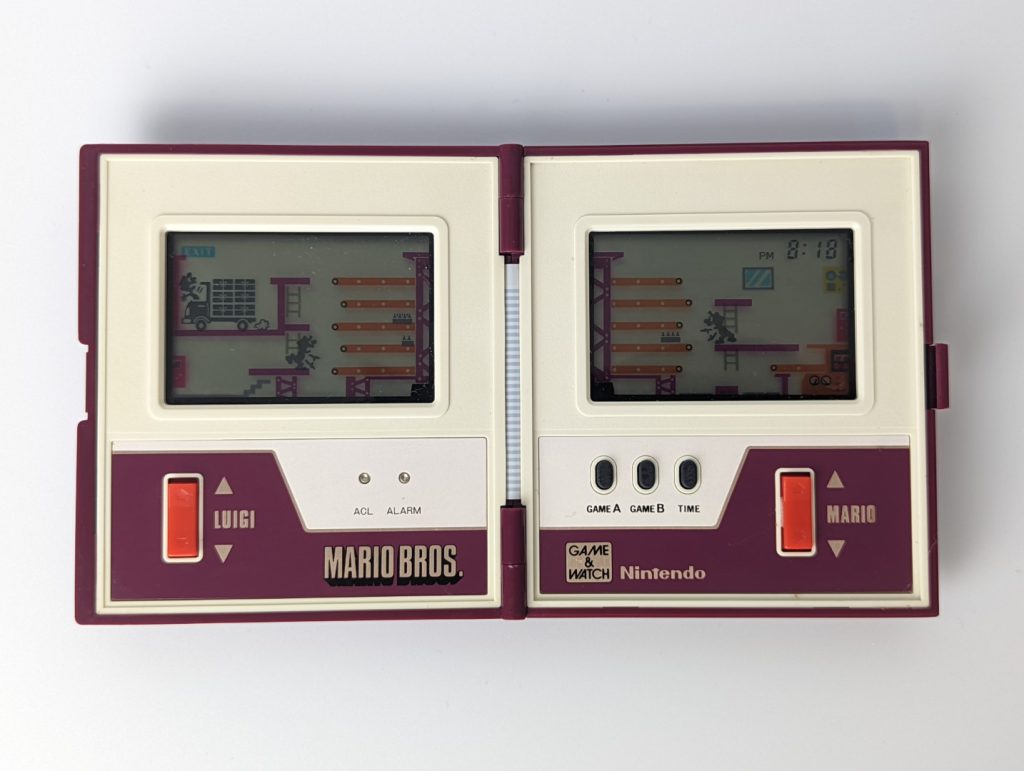 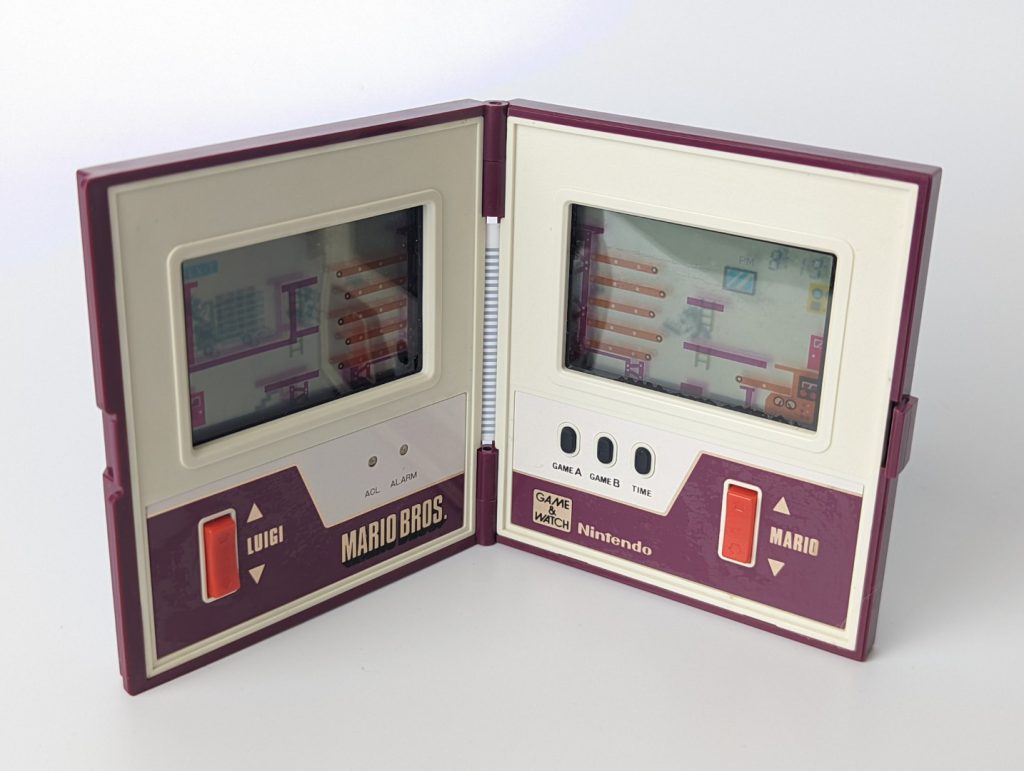 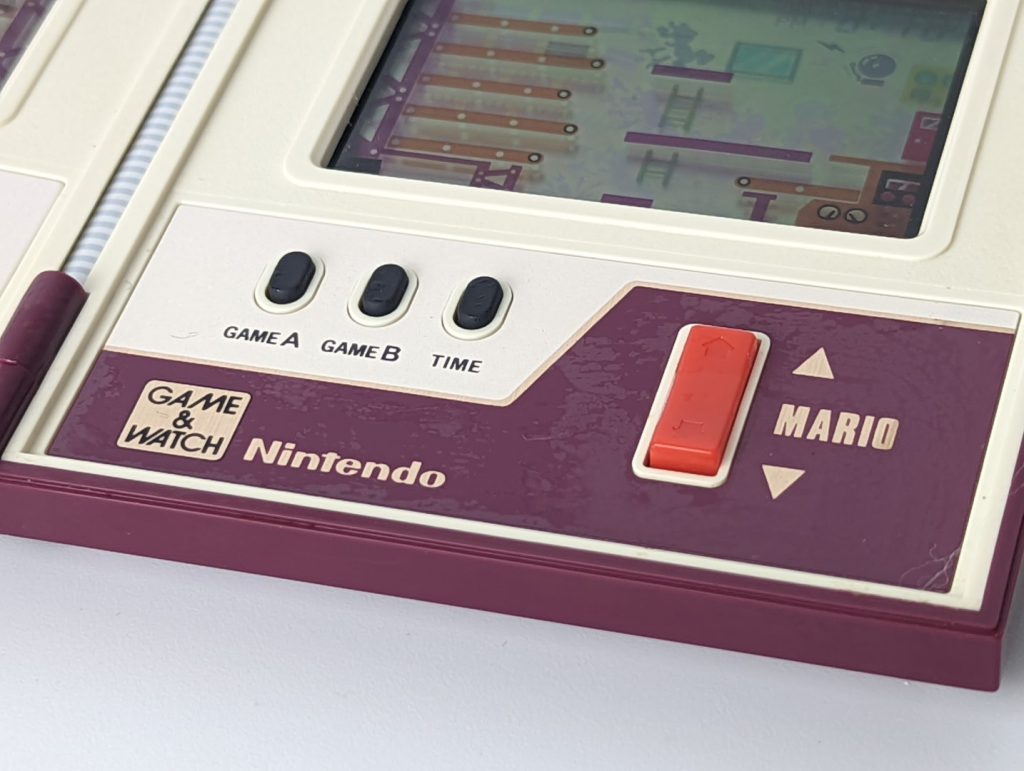 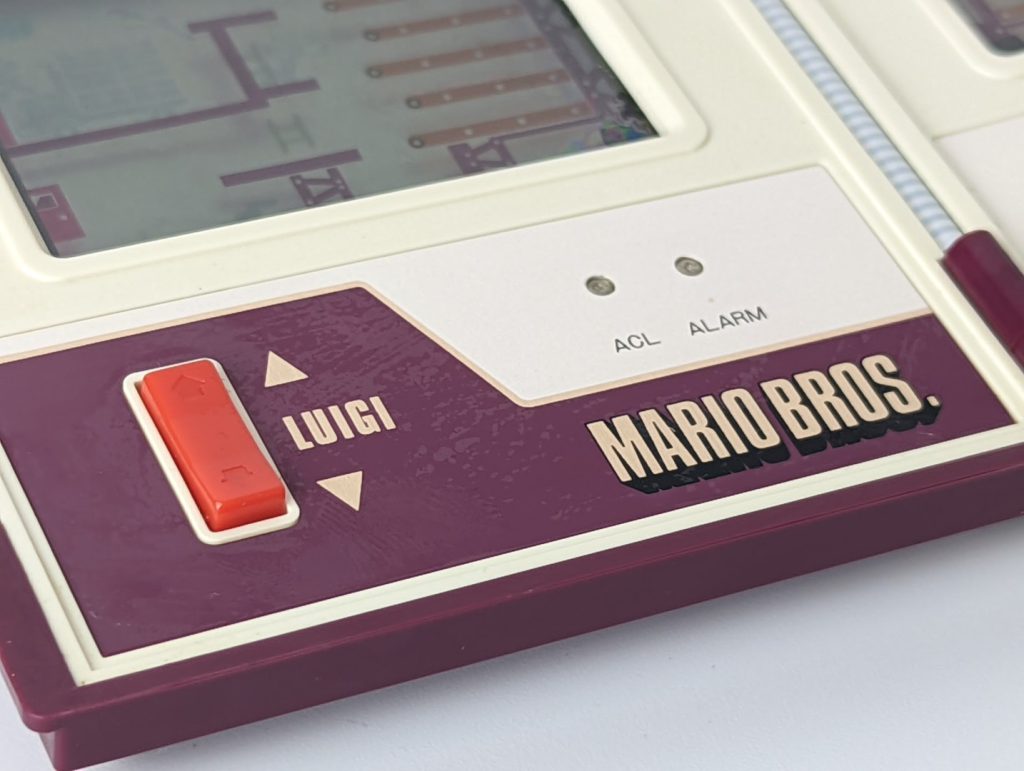 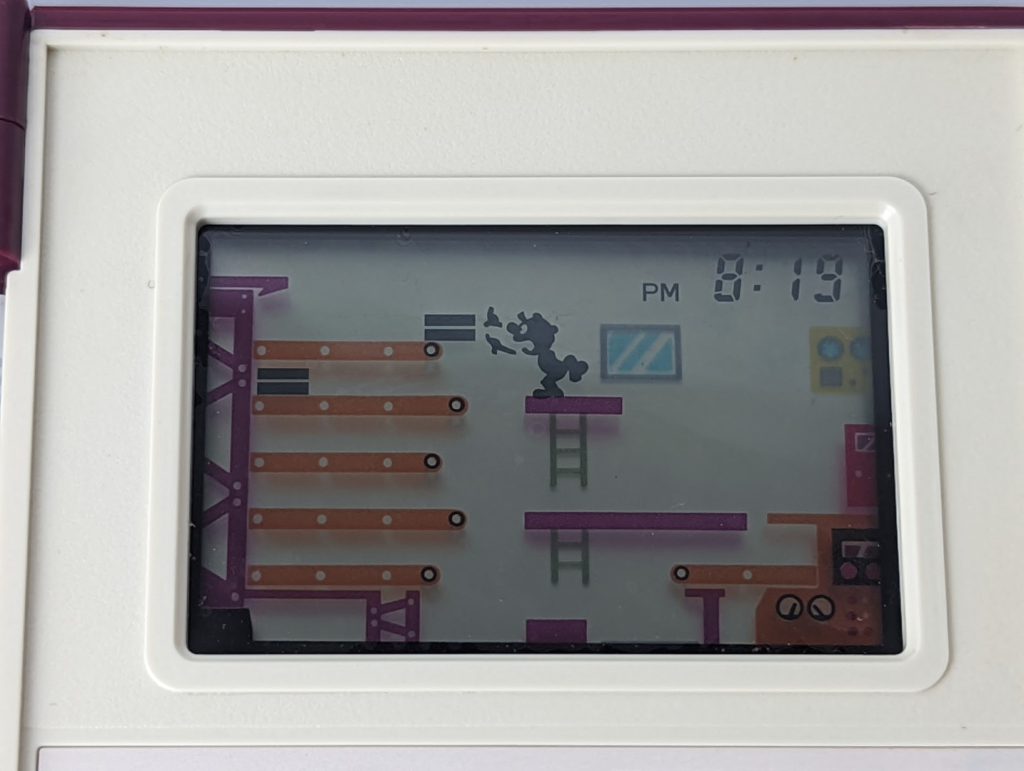 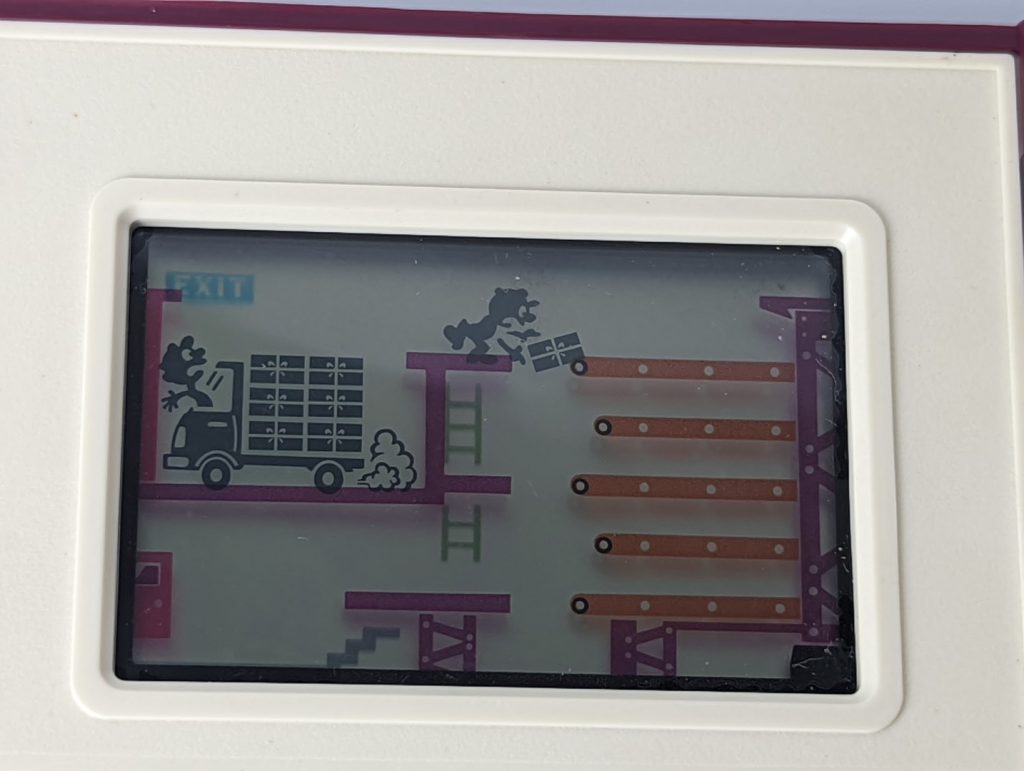 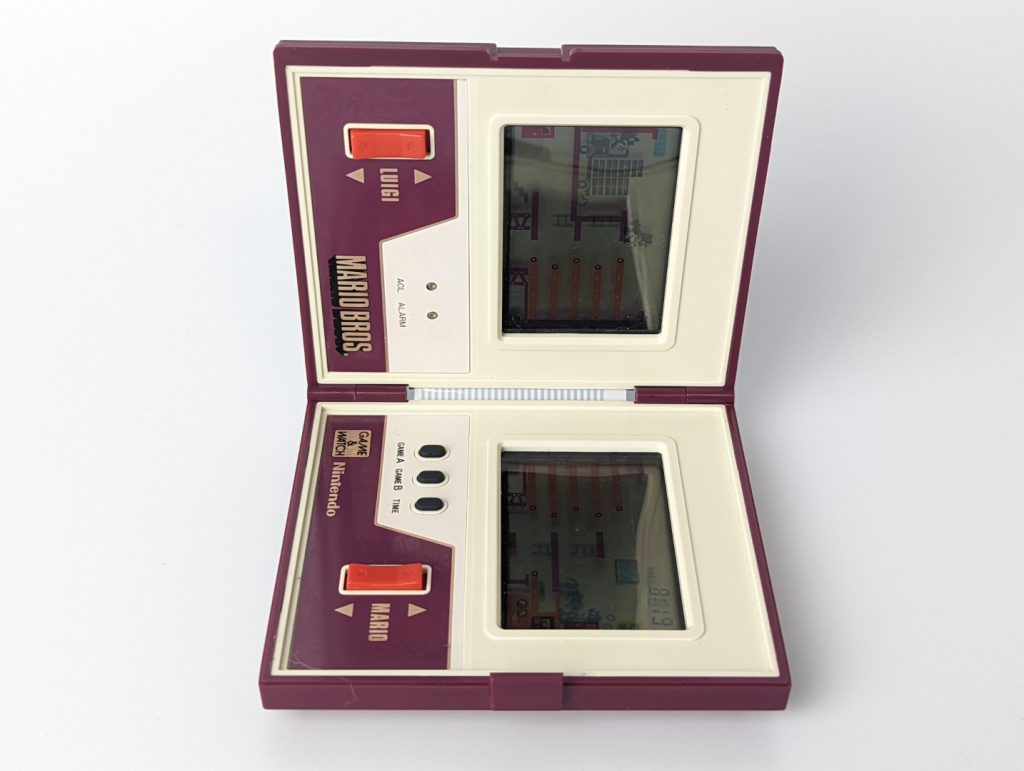 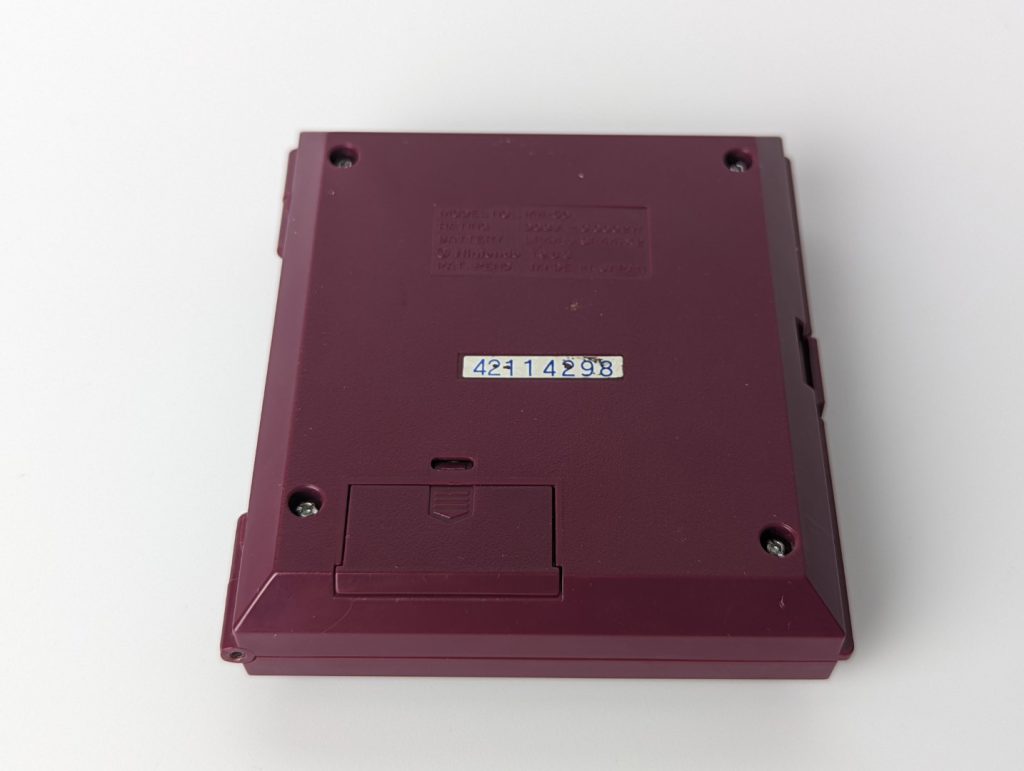 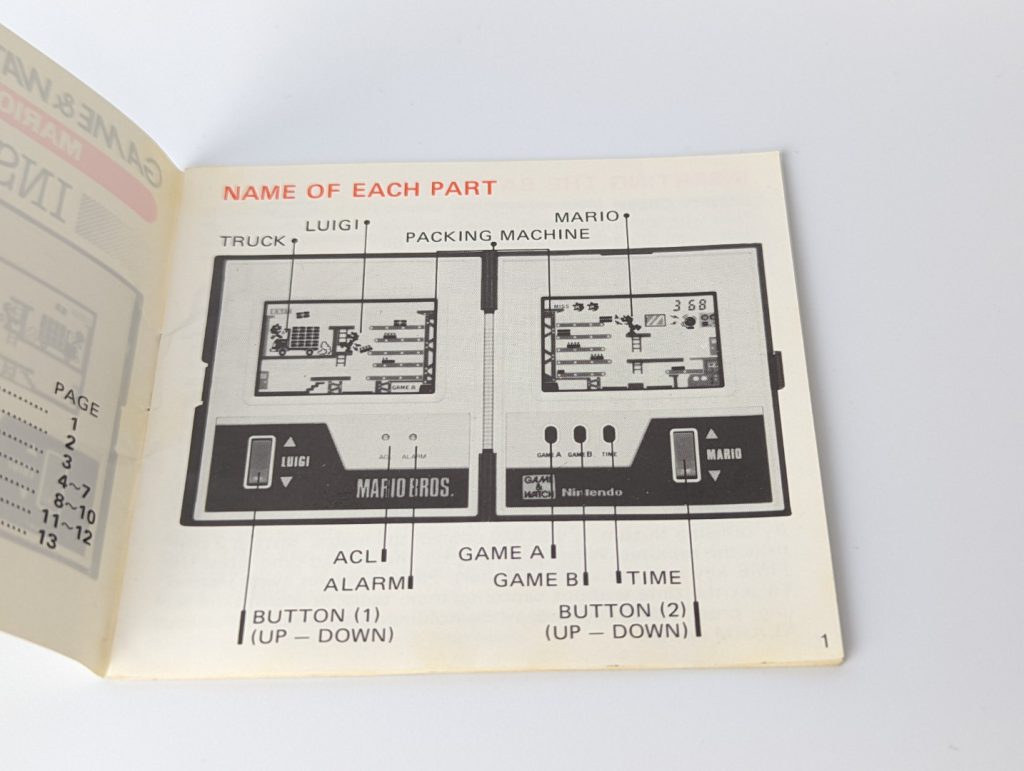