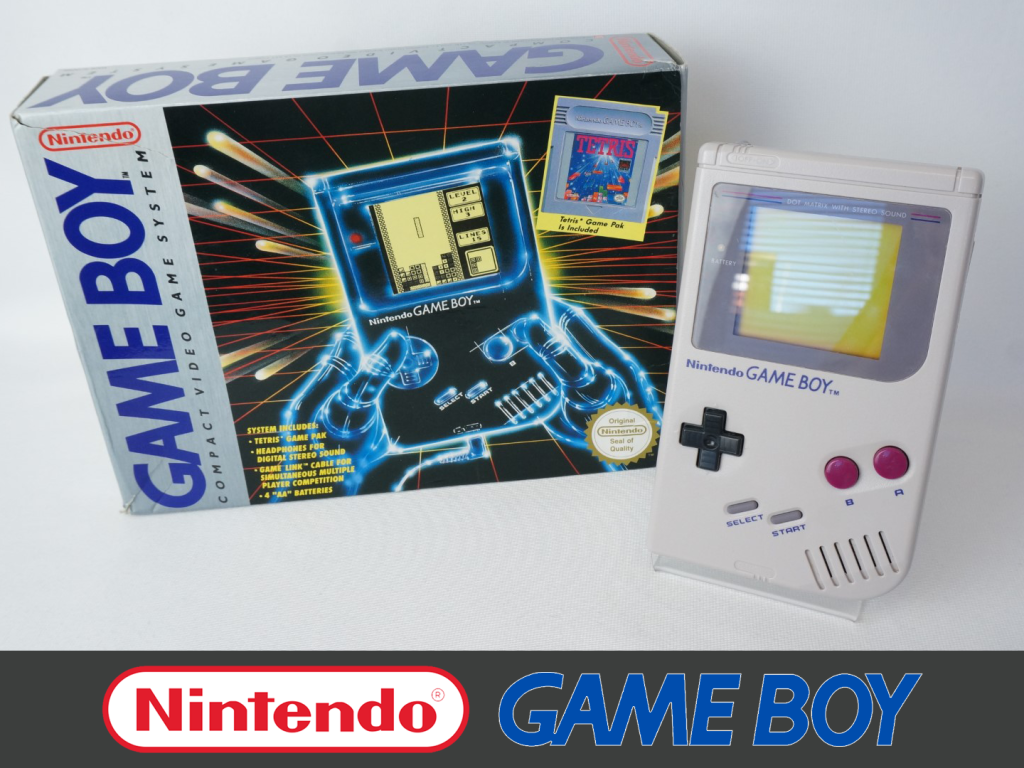 The Game Boy is an 8-bit handheld game console by Nintendo and was released in 1989. It was designed by the same team that developed the Game & Watch series of handheld electronic games and several Nintendo Entertainment System games.

Despite being technologically inferior to its fourth-generation competitors (Sega’s Game Gear, Atari’s Lynx, and NEC’s TurboExpress), the Game Boy received praise for its battery life and durability in its construction. It quickly outsold the competition, making it the third best-selling video game console of all time. It is one of the most recognizable devices from the 1990s, becoming a cultural icon in the years following its release.

Ironically considering its name, Game Boy was also one one of the first games machines to successfully target female players. In 1995, Nintendo claimed that 46 percent of Game Boy users were female, a major leap from 29 percent on the Nintendo Entertainment System. This has remained a cornerstone of Nintendo’s marketing and design approach.

The Game Boy was the first portable system to show that handheld games could be more than just snack-sized diversions. The machine boasted dozens of epic fantasy role-playing titles familiar from home consoles – including Legend of Zelda: Link’s Awakening and Final Fantasy Adventure. Mammoth platformers Metroid, Castlevania and Mega Man were also highlights among the 700-odd Game Boy software library.

The Game Boy, combines features from both the NES home system and Game & Watch hardware. It’s exactly the same set up as the Nintendo Entertainment System controller, making it hugely familiar to gamers. This also meant that it was easy for developers to convert games from the hugely successful NES to the new handheld machine.

The console features a dull green dot-matrix screen with adjustable contrast dial, five control buttons (a directional pad, two game buttons, and “START” and “SELECT”), a single speaker with adjustable volume dial, and, like its rivals, uses cartridges as physical media for games. The colour scheme is made from two tones of grey with accents of black, blue, and dark magenta. All the corners of the portrait-oriented rectangular unit are softly rounded, save for the bottom right, which is curved. At launch, it was sold either as a standalone unit, or bundled with one of several games, namely Super Mario Land or Tetris. Several accessories were also developed, including a carrying pouch, Game Genie, and printer.

The Game Boy has four operation buttons labelled “A”, “B”, “SELECT”, and “START”, and a directional pad (d-pad). There is a volume control dial on the right side of the device and a similar dial on the left side to adjust the contrast. At the top of the Game Boy, a sliding on-off switch and the slot for the Game Boy cartridges are located. The on-off switch includes a physical lockout to prevent users from either inserting or removing a cartridge while the unit is switched on.

The Game Boy contains optional input or output connectors. On the left side of the system is an external 3.5 mm × 1.35 mm DC power supply jack that allows users to use an external rechargeable battery pack or AC adapter instead of four AA batteries. A 3.5 mm stereo headphone jack is located on the bottom side of the unit which allows users to listen to the audio with the bundled headphones or external speakers.

The right-side of the device offers a port which allows a user to connect to another Game Boy system via a link cable. The port can also be used to connect a Game Boy Printer. The link cable was originally designed for players to play head-to-head two-player games such as in Tetris. However, the link cable technology was later used as a method of communication and networking in the popular Pokémon video game series. 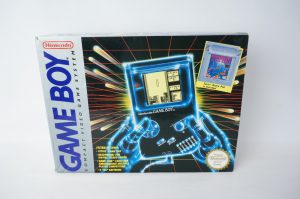 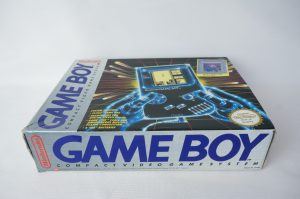 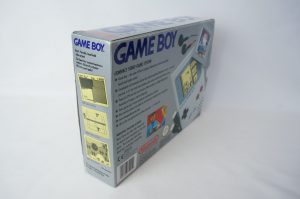 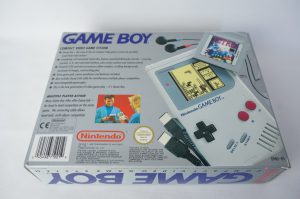 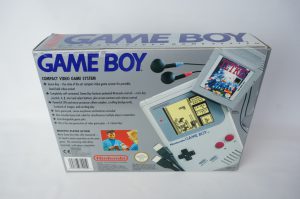 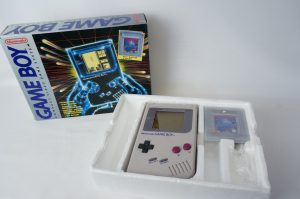 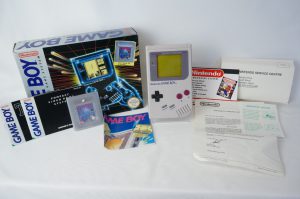 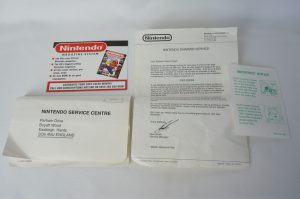 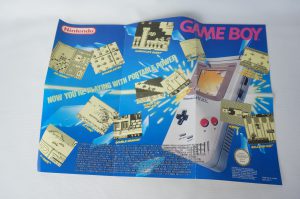 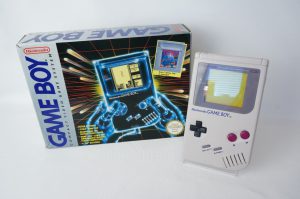 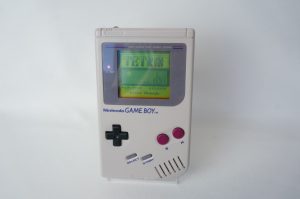 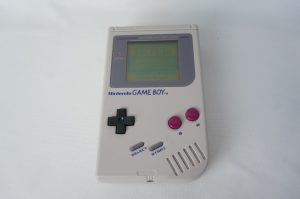 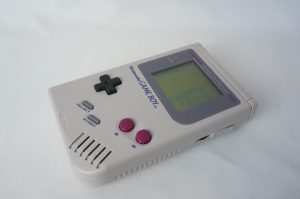 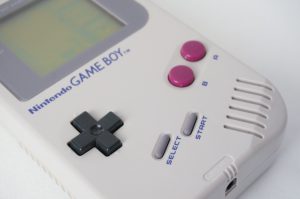 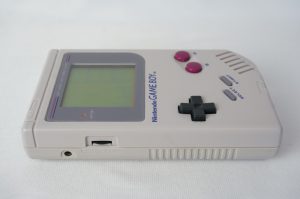 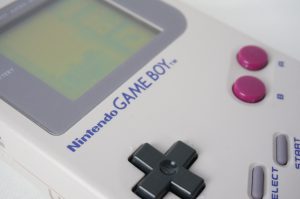 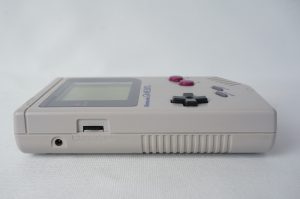 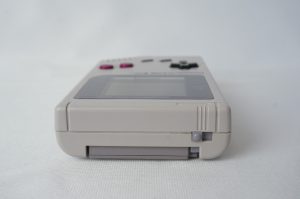 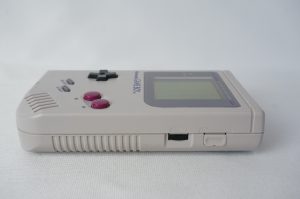 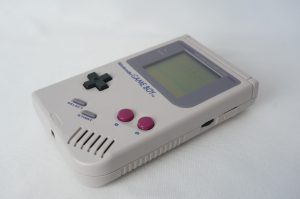 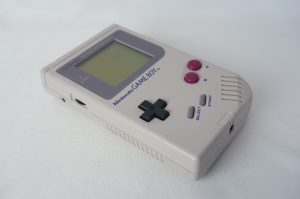 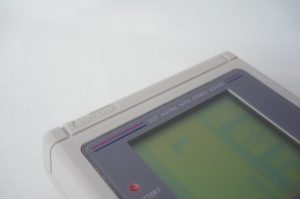 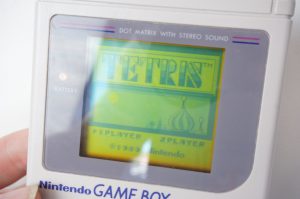 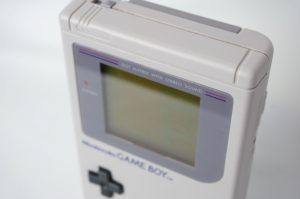 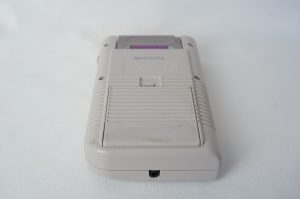